Swordsmith Teruyasu Fujiwara the fourth has named these knives Maboroshi no Meito, "Visionary Sword Celebrated in Victory" -- a bold claim, but one that is deserved. Fujiwara's knives exceed all expectations of performance and edge holding.
These knives are completely hand forged by a true master. The hard shirogami #1 (white carbon steel) core is laminated between softer stainless steel. This technique results in a knife that has the performance of a carbon steel knife (a keen, long lasting edge and ease of sharpening) without many of the maintenance issues (rusting and oxidation). Because only the carbon steel cutting edge is exposed, the knife is far less likely to rust. The blade is then hardened to Rockwell 64-65 (very hard!).
Following in the best tradition of knife making, a steel ferrule is forge-welded to the tang to ensure that food particles cannot become lodged between the tang and the wooden handle. Both the blade and tang are distal tapered for the best possible balance and performance. The hand-hammered surface reduces the likelihood of food sticking to the side of the knife while chopping and slicing.
Professional chefs generally hold a knife by pinching the blade with the thumb and fore-finger. The unique finger notch cut from the choil makes this grip even easier and more comfortable.
These knives are finished with a western-style black pakka wood handle. This resin impregnated wood handle holds up exceptionally well to the heavy demands of either a home or commercial kitchen. The handle is set on a full tang with three rivets for strength and durability. 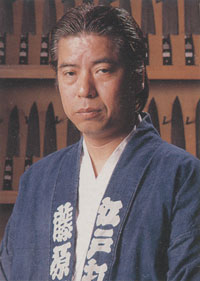 Over 130 years ago, Teruyasu Fujiwara the first began his career as a master blacksmith, forging farm tools. When his son Fujiwara the second was of age, he was apprenticed to the famous Tokyo swordsmith Masahide Suishinshi. After some years of training, he retuned to his father’s shop and commenced his successful life as a master swordsmith. The family continued this tradition until sword making was restricted after WWII. By the end of the 1960s, the Fujiwara family began making kitchen knives. They were determined to make knives that would make a swordsmith's family proud. To this end, they spent the next ten years developing the steel and techniques necessary to forge-weld stainless steel with high carbon steel and then properly temper the blade. It took all of the knowledge gained by the family from more than 100 years of forging swords to successfully produce their current offering of kitchen knives. Since the late 1990s, Fujiwara the fourth has continued the family tradition.